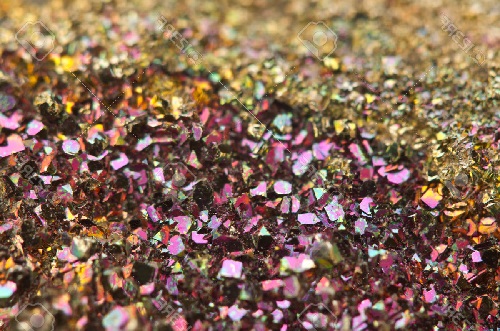 Small brassy blades, needles and numerous other crystal forms of marcasite are commonly found on ferroan dolomite in association with quartz, calcite and barite. It is impossible to precisely pinpoint the individual positions of marcasite in the sequence as there are perhaps tens of generations. It may be possible that the marcasite is continually forming, though some habits appear to be more prevalent at particular stages in the sequence.

Some of the largest marcasite crystals found in the septaria are long needles, which have been observed up to 2 centimeters in length. The longest needles have been found protected inside crystalline quartz.

These crystals have a thick base which elongates into a slender needle termination. An example of this can be viewed in the photo to the upper right. Notice that this particular marcasite needle was formed after the chalcedony generation, and later encased with 3rd generation quartz crystals.

Smaller crystals of similar form, not encased in quartz have also been observed. Free standing crystals of equal size may exist, but are either too fragile to withstand the collecting method or have been dissolved. One of the more interesting marcasite habits are feather like blades which occur more frequently on early generations of ferroan dolomite.

Typically these are micro sized crystals up to 4 millimeters in length, 1millimeter in width and immeasurable thickness. These crystals attach to the matrix at the narrowest width of the blade and expand slightly towards the termination. The sides of the blades are of unequal length with an angular termination as seen in the photo to the lower left.

When viewed under magnification, these blades are highly iridescent. An entire study could be devoted to the variety of other less common forms observed at the Monroeville locality. Most of these appear more frequently on later generations of ferroan dolomite. Marcasite forms which have been identified include tabular, pyramidal and prismatic, each with various modifications. In general, these are less than 1 millimeter in size. 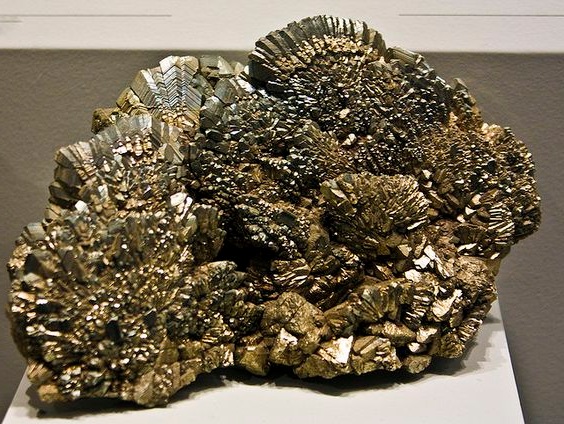 The more common iron sulfide polymorph found at the Monroeville locality is pyrite. Pyrite is found abundantly at the locality as micro crystals and crusts inside large septaria and as crystalline nodules throughout the shale. Some of the septaria also have a rind of solid pyrite. Like marcasite, pyrite appears to have formed at several positions in the sequence.

The majority of pyrite crystals found resting on ferroan dolomite and other vein minerals inside the septaria are less than .5 millimeters in size. Several crystal forms have been observed, but the majority of crystals are predominately cubic or octahedral with various other modifications.

The photo to the right shows a typical example of pyrite crystals on ferroan dolomite. Large nodules and discoidal masses of crystalline pyrite, many with projecting pseudomorphs of marcasite, are abundant at certain levels of the shale.

Pyrite nodules up to 50 centimeters have been observed and can be found littered at the base of some shale cliffs. Most of the pyrite nodules have veins of barite, calcite or ferroan dolomite. Examples of pyrite nodules from this locality are exhibited in the photo to the left. Similar pyrite nodules are found throughout the Ohio shale, most notably near Frankfort in Ross County