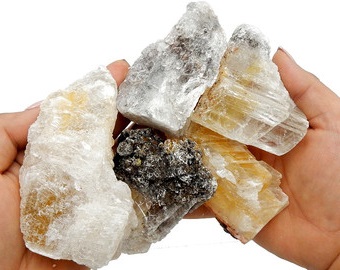 Perhaps the key to how Selenite develops at this locality can be found in the distinct phantoms which are common in these crystals. Three classes of phantoms have been observed in crystals from the clay outcrops along Meander creek; growth, hourglass and planar. The most common and revealing of these is the growth phantom.

It is also important to note that the smallest phantom in this crystal is sharper and truer to form than the crystal. This leads to the conclusion that Selenite crystals, at this locality, become more and more imperfect as they grow larger. The hourglass phantom is often more difficult to see in Selenite crystals from this locality.

Typically, it occurs as a faint outline of an X. Under ultraviolet light, it is much more noticeable. The photo to the lower left is a clear example of this phantom. Planar phantoms occur along cleavage planes in the crystal. Typically, these cracks are parallel to the clinopinacoid face (b).

These phantoms are irregular and look like a smeared oil stain inside the crystal. The crystal in the photo to the right is a typical example of this. Most crystals from the locality show this irregular phantom.