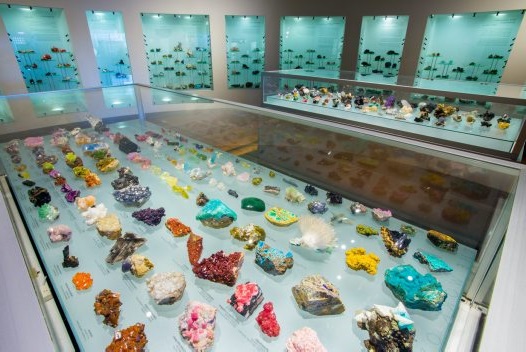 While collecting along the Huron River can be very enjoyable, a great deal of effort is required to collect quality septarian minerals. The casual collector may find this locality to be barren and frustrating as a large sledge hammer, splitting wedge, and pry bar are necessary to split open the large septaria and reach unexposed pockets.

The septaria at this locality have many ferroan dolomite and barite seams as well as other natural cracks which tend to be good splitting points. A 2-4 lb. crack hammer and chisel are useful for trimming the broken pieces of the septaria. The ferroan dolomite can be carefully chiseled away from the limestone matrix, occasionally in plates.

Most collectors will find that a rock hammer or rock pick are of little use at this locality, with the possible exception of digging through the shale to find pyrite nodules. Other necessary items include safety glasses, gloves, buckets, newspaper, drinking water and bug spray. A hand lens may also be useful. Collectors will want to wear either boots or old shoes, but not sandals or other open toed shoes as the limestone fragments and shale can be very sharp.

Collectors should also expect to walk long stretches of the river to reach unbroken septaria, though fragments of septaria are found littered along the banks and occasional small specimens of fair quality can be collected from these. Collectors should be prepared to carry both tools and specimens a fairly long distance.

A few collectors have attempted to use a gasoline powered concrete saw to slice into the septaria, though this is not necessary and in fact takes more effort than using traditional methods. Like much rock collecting in the state, the easiest way to collect good specimens at this locality is to move a lot of rock.

With the right tools, two diligent collectors can dissect multiple septaria in a single day if working together. Furthermore, it is generally not a safe practice to collect alone, especially at a locality like the Huron River where there are numerous hazards. When examining septaria, keep in mind that most pockets within will have only ferroan dolomite.

The large septaria often have very few pockets with large crystals of multiple minerals and these may be in one small area. Additionally, some pockets in the septaria are filled with clay, which when washed out occasionally exposes good crystal specimens.

The Lamereaux road bridge locality and other sites along the west branch of the Huron River are among the most scenic places in Ohio to collect minerals. The numerous shale cliffs rising up through the deciduous trees along the crystal clear river are very photogenic, especially in autumn. The lucky visitor to the site may be treated to a fly over by the local nesting pair of American bald eagles.

Visitors to the locality should park on the berm along Lamereaux road on the west side of the Huron River. The river can be reached by several well traveled paths adjacent to the bridge. Visitors should be mindful not to cross the fields and to remove all trash. Failure to do so may result in the eventual closure of the site.

The best time to visit the locality is during dry periods throughout the summer when the water is low. When the water is high, the locality should be avoided, as the river can be very dangerous. The bed of the creek, which is composed of shale is often slick and the currents are very strong after significant rain.

Visitors should be aware that even during dry periods, there are very deep pools which should also be avoided. Many of the high cliffs are severely frost cracked and all are very unstable and should never be climbed.

Septarian mineral specimens from the Huron River should be appreciated both for the aesthetic nature of the pieces and the uniqueness of the occurrence in Ohio mineralogy. While these specimens are greatly unlike minerals from the better-known limestone and dolostone quarries in the state, and in some respects unlike those from other Devonian age septaria localities, the minerals from this locality should be accepted as being of equal importance and perhaps greater value.

Quality specimens from this location are more difficult to obtain than good pieces from many of the classic quarry localities where specimens are at times abundant. The observations delineated in this article likely represent a very small portion of the mineral habits that this locality may potentially produce.

All of the mineral specimens photographed for this description were collected during a series of visits to the locality between the years 2000 and 2005. The Lamereaux road bridge locality will undoubtedly produce additional mineral habits and associations in the future as individual septaria can be somewhat unique.

Additional mineral species may also be identified from septaria at this locality in years to come. Indeed, several mineralogical aspects, both septarian and non septarian, of the locality deserve further study.

In particular, the origin and paragenesis of the various septarian minerals and how the sequence of mineralization at this locality is related to other similar occurrences throughout the Huron shale in Ohio.