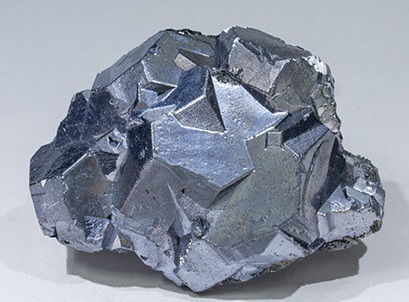 A single specimen of galena was recovered from the Lamereaux road bridge locality. While there is no prior report of galena at this locality, the occurrence is not entirely unexpected. Galena, while rare in the state, is found as small crystals in concretions at various Pennsylvanian age locations.

Galena crystals are also periodically encountered in several Silurian age dolostone quarries near Toledo. Several other occurrences of massive, non crystalline galena have also been reported across the state.

The specimen found at the Monroeville site has a single metallic gray, predominantly octahedral crystal with cubic modifications. The faces of the crystal are smooth and slightly curved. The crystal is partially damaged and shows a distinct cubic, mirror bright cleavage. The crystal was found resting in the boxwork of 2nd generation ferroan dolomite on the back of a specimen with 3rd generation quartz crystals.

Unfortunately, this does not pinpoint the occurrence in the sequence. In time, perhaps more galena specimens will be discovered and the mineral’s position in the sequence can be determined.

The photo to the left displays the galena specimen. Although this particular galena specimen has little value, it does indicate the potential for better crystal specimens of a rarely seen Ohio species.

At the Monroeville locality, thick masses of halotrichite-pickeringite, crusts of melanterite and masses and tiny crystals of gypsum as efflorescences are at times abundant on the under sides of shale ledges. Efflorescences will not be described individually in this article, since these minerals are not found in septaria.

For reference, thick masses of white to yellow halotrichite- pickeringite are common after a long period of hot dry weather. Since the mineral series is water soluble and highly unstable, it disappears after heavy rain. White crusts of melanterite can be found after a period of dry weather on the shale surrounding pyrite nodules.

Although efflorescences are quite interesting mineralogically, these minerals are too unstable and lacking in aesthetics to be of value to mineral collectors. Specimens can only be preserved in air-tight containers.

During wetter periods, gypsum, which is more stable, is the more common efflorescence to be found at the locality. Crusts, seams and tiny fibrous crystals of gypsum have been observed on shale, but are generally too small to be of interest to collectors.